There was a profound need to bring fire detection and fire-fighting on-board container ships higher up on the safety agenda of regulators and the industry at large, marine insurer Gard has said, noting that the SOLAS regulations had not kept pace with the realities of the risks faced.

In late 2018 Gard started an initiative with the objective of better understanding the causes of cargo-related container ship fires and what could be done to mitigate risks. Gard invited a number of stakeholders to its headquarters for a two-day conference on October 17th and 18th, which was broadly attended.

Gard presented an overview of the issue based on its own analyses and on the discussions at the Gard conference.

Root causes of container ship fires
Gard said that there was a broad consensus at the conference that the root cause of fires was often hazardous cargo. Between 10%  and 12% of containerized cargo fell into the category of hazardous, or “regulated cargoes”. The fundamental challenge was to carry such cargo in a safe manner on ships. Certain chemicals such as calcium hypochlorite, electronics, batteries and charcoal were among the dangerous cargos known to ignite inside cargo containers.

Gard said that shippers’ misdeclaration of such cargo was probably the single biggest problem which needed to be tackled to prevent fires on-board.

Gard said that, in its view, the problem was wider, and that many of the container ship fires it had seen had arisen from other causes, such as errors in packing and securing of cargo, or various manufacturing defects. Gard said that several container ship fires had been caused by self-heating, combustion or explosion of dangerous cargoes that have been properly declared and properly packed. The combustible nature of the cargo was an important risk factor in and by itself.

Addressing the cargo supply chain
Gard said that root causes originating from the global cargo supply chain and trade mechanisms needed to be addressed. Studies conducted both in Europe and the US that focused on the accuracy of information concerning shipments of dangerous goods in containers revealed alarming statistics. More than 50% of shipments of dangerous goods proved to have deficiencies in terms of declarations or packing/securing for certain trades. The risk remained systemic, despite efforts by container liner operators to improve their routines through “Know Your Customer” programmes, shipper and cargo screening and strengthening dangerous goods booking teams. Conference participants heard about these initiatives and others, including engaging with the authorities of some of the states where much of the dangerous cargo originates.

Gard reported several discussions on how to develop quality in the cargo supply chain. These included mandatory liability insurance for shippers and standard verification of shippers involved in transportation of dangerous goods.

The announcement by several container carriers this year that they would be imposing penalties for any misdeclaration of hazardous cargoes seemed to have been well received, although some participants questioned whether the proposed penalties would be enforceable in practice. Gard said that it believed such preventive measures to be "positive and necessary". The insurer said that "shippers are likely to improve their practices if they know that there is a higher chance of wrongful cargo bookings being detected through inspections and that there will be consequences for sloppy or, even worse, fraudulent practices".

Gard observed that, to discourage rogue shipments even further, authorities could do more to prosecute offenders and bring them to justice. The IMO had urged governments to implement inspection programs for dangerous goods, but "few seem to have acted on this so far".

However, Gard said that it was questionable whether any such programmes would extend to cargo not seemingly dangerous as per the cargo declarations. "Governments and shipping lines may have little appetite for these inspections, given the cost and their influence on speed within a highly competitive supply chain", said The insurer observed that, to date, the container lines had been unable to share the identity of rogue shippers or develop a common cargo screening system within the alliances to prevent a rogue shipper finding a weak link.

The reality today was that unsafe shipments were going to slip through even the tightest prevention net. Gard said that it therefore became necessary for shipping companies to further enhance focus on what they can control – the ship and crew.

Fire detection and firefighting on board
Gard accepted that there would always be a risk of cargo generated fires as long as dangerous goods were shipped. The question was whether modern container ships were equipped and prepared to deal with a fire adequately without endangering the crew.

Fire detection on container ships today was largely based on the detection of smoke, not temperature. When the fire was detected by smoke in the cargo hold, it was often too late, already too dangerous for crew to enter the cargo hold. The remaining option was to release the limited amount of CO2 on board. However, Gard noted that releasing CO2 into the cargo hold, had proved to be insufficient for extinguishing fires inside a container. The CO2 does not penetrate the container and container hatches are not tightly sealed, meaning the CO2 escapes before the fire can be extinguished.

Fires in containers on deck presented other challenges. The larger ships might have container stacks up to 30 meters high, meaning that many containers would be out of reach for the fire hoses on board. The current SOLAS requirements were largely the same as for other cargo vessels, with some minor additional requirements for container vessels constructed after January 1st 2016. Gard said that the regulations appeared to represent "a compromise following years of debate", adding that "today’s experts’ opinion concerning the required equipment is that it will be of very limited value in most container ship fire scenarios".

Innovation in firefighting equipment
Selected companies developing equipment for fire detection and firefighting were invited to speak and to present their products at the conference, with the purpose being  to demonstrate that there were solutions available if there was a will within the container shipping industry to improve.

Radicos Technologies GmbH (Germany) offer temperature monitoring for road tunnels and greenhouses that could be installed in cargo holds, thus allowing vessels to monitor temperature of as little as 0.1 degrees Celsius.

Liberty Gasturbine (The Netherlands) offers an adaptation for marine use of equipment used to extinguish fires in mines by way of constant supply of inert gas mixed with water.

Looking ahead
It was said by several during the conference that the current objectives of SOLAS were not met onboard the container ships of today. There would be no viable solution to address the risk of fire aboard modern container ships without revised IMO regulations (SOLAS).

The conference was told that some shipping companies had invested in firefighting equipment in excess of SOLAS requirements. But the Classification Societies present said that not many companies had taken up more comprehensive measures that were contained in additional Class Notations.

Gard said that it expected to be involved further in discussions with the German Flag State, which was working on a submission on these exact issues to be proposed to the IMO Marine Safety Committee in 2020.

Gard concluded that "history has shown that effective mitigation measures can be found in relation to large and complex risks arising from shipping activities. Oil spills from tankers have been dramatically reduced over the past 50 years through a combination of international, regional and national laws and regulations, stricter quality vetting by charterers, improved ship design, improved operational standards, more scientific approach to prevention and response, as well as generally a higher regard for the consequences of pollution to the marine environment, business and society at large. Where there is a will, there is a way." 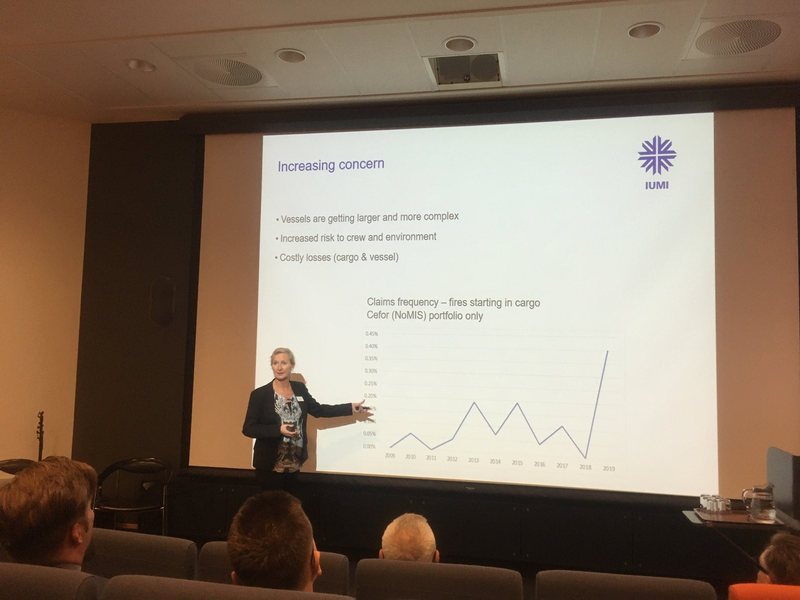