Lebanon has placed under house arrest the Beirut port officials responsible for storage and security, pending an investigation into the explosion, which looks likely to have killed hundreds, injured thousands and caused property damage worth north of a billion dollars.

The Lebanese army will oversee the house arrests while the investigation continues.
Lebanese President Michel Aoun said that 2,750 tonnes of ammonium nitrate had been stored at the site continuously for the past six years. Aoun said that long-term storage of a large quantity of explosive material so close to central Beirut was "unacceptable."

Maritime security firm Dryad Global said that the explosion was probably an accident. "At this stage, it is likely that this incident is an industrial accident, and did  not suggest military or terrorist activity. The presence of naval assets within the area was not indicative of any likelihood of potential targeting by foreign actors, said Dryad, adding that "the area surrounding the port location is not a key location associated with incident reporting. The risk to vessels intending to transit to or in the vicinity of Beirut is not immediately escalated as a result of this incident. However, on account of the cessation of all operations at the port and potential for chemical contamination, all vessels should avoid."

Customs chief Badri Daher told LBCI TV that his agency had repeatedly asked for the ammonium nitrate to be removed from the port, but he said that "this did not happen, and we leave it to the experts to determine the reasons".

The port's general manager Hassan Koraytem told local broadcaster OTV that the ammonium nitrate had been in the port for six years, following a court order. However, despite instructions from the customs department and state secretary to move or export it, "nothing happened", he said.

A letter shared on social media showed that on several occasions between 2014 and 2017 customs officials had warned judges of the risks associated with storing the explosives in Hangar 12.

How the material might have found its way into Hangar 12 was revealed by the FleetMon web site.

The Moldovan-flagged vessel called at Beirut port after the vessel suffered technical difficulties. It was inspected by Port State Control officers, who found “deficiencies” and banned it from sailing. That left the Rhosus stranded in Beirut.

The majority of the ship’s Ukrainian crew were repatriated on the grounds that they were in “imminent danger” due to the explosive nature of the cargo on board.

FleetMon said that the Rhosus was owned and operated by Mr Grechushkin Igor, a Russian citizen who in 2014 was resident in Cyprus. The last known manager was Teto Shipping, Cyprus. But the Rhosus was, effectively, abandoned. The owner of the cargo also declared abandonment. The ammonium nitrate was later stored in Hangar 12, which on Tuesday appeared to have been ignited by the Hangar immediately to the east of it, which had caught fire shortly before.

However, none of this has yet been confirmed officially.

Ammonium nitrate is a crystal-like white solid which is made in large industrial quantities. Its biggest use is as a source of nitrogen for fertiliser, but it is also used to create explosions for mining. If a large amount of material remains in the same place for a long time it begins to decay. If it absorbs moisture it can solidify. Also, former senior military intelligence officer Philip Ingram told BBC Radio 4's Today programme that the longer it is left, the more likely it will get contaminated with items such as fuel oil. Once that happens it can produce a reaction in the chemical. "It generates its own heat and, once it's started, it continues to generate it and that will build up over time," Ingram said, adding that this could "then lead to the high-order explosion that we saw in those horrific videos that came out of Beirut."

Lebanon's ability to import food supplies will be minimal now that its main port is unusable. In addition, a grain silo next to the Hangars that exploded was severely damaged. Food supplies for Lebanon could become a critical factor within weeks.

The size of yesterday's explosion can perhaps be better appreciated if one realizes that the Oklahoma City bombing in 1995, which destroyed a federal building and killed 168 people, was caused by two tonnes of ammonium nitrate – less than 1/1000th of the material which made up yesterday's blast.

The force was so great that the ground beneath the hangar was vaporized, leaving the sea to enter the gap. 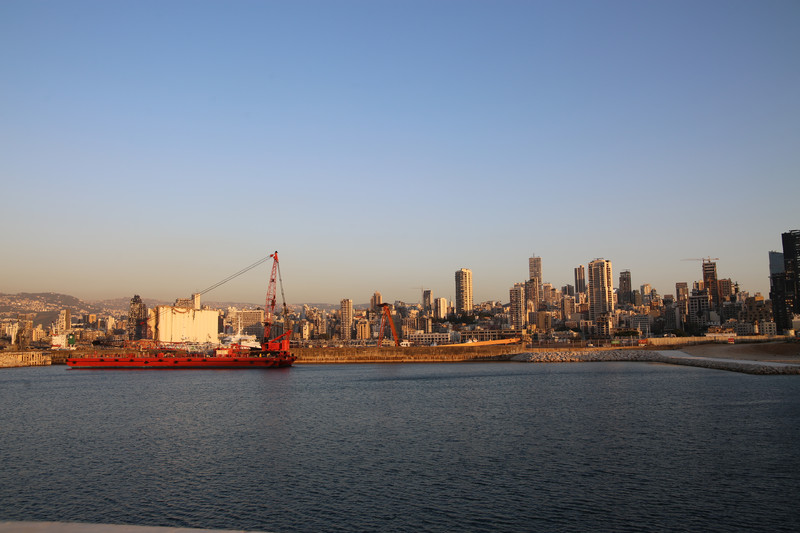