Container ship fires – a challenge for the future

Container ship fires are a real concern for marine insurance and the shipping industry as a whole. Major fires on container vessels, such as the Maersk Honam this year, the CCIN Arauco or the Maersk Karachi in 2015 show the helplessness and vulnerability of the crew onboard and fire fighters ashore.

By their nature cargo fires on container ships are extremely problematic as they are very difficult to extinguish. In addition, the causes of the fires tend to be found in the cargo itself. With almost complete certainty, the reasons behind these tragic examples are misdeclared or undeclared dangerous goods.

The International Maritime Dangerous Goods (IMDG) Code currently has extremely high standards to adhere to and continues to improve year on year. The problem is that in some parts of the world the IMDG Code is not taken as seriously as it is intended. In order to mitigate this issue, a well-developed governmental infrastructure needs to be put in place and well-trained personnel are required. However, this is not a problem that the International Maritime Organization (IMO) is in a position to solve and which must be tackled by the individual national states.

The cargo capacity of container ships has been increasing dramatically and therefore so has the probability of having misdeclared dangerous goods on board.

IUMI’s Loss Prevention Committee (LPC) is asking why are ship crews and land-based firefighters not able to deal with cargo fires? The answer the LPC has come up with is that there is no fire detection system on deck. The CO2 system under the deck is a combined firefighting and detection system but this is outdated for extremely large ships that carry cargo in containers.

The LPC has developed a position paper with proposed technical solutions. These solutions include effective heat and fire detection on deck and under deck, horizontally (between deck cargo and cargo holds), vertical fire sections, additional water based firefighting systems under deck, and remote controllable monitors on deck. IUMI´s LPC wants to put container ships back into a position where the crew is able to fight the fire effectively on their own, without entering the danger zone.

The LPC Position Papers about "Fire-Fighting on Container Vessels" and "Fires on RoRo Passenger ferries" were published in 2017 and can be found in the "Opinion" section of the IUMI website: https://iumi.com/opinions/position-papers 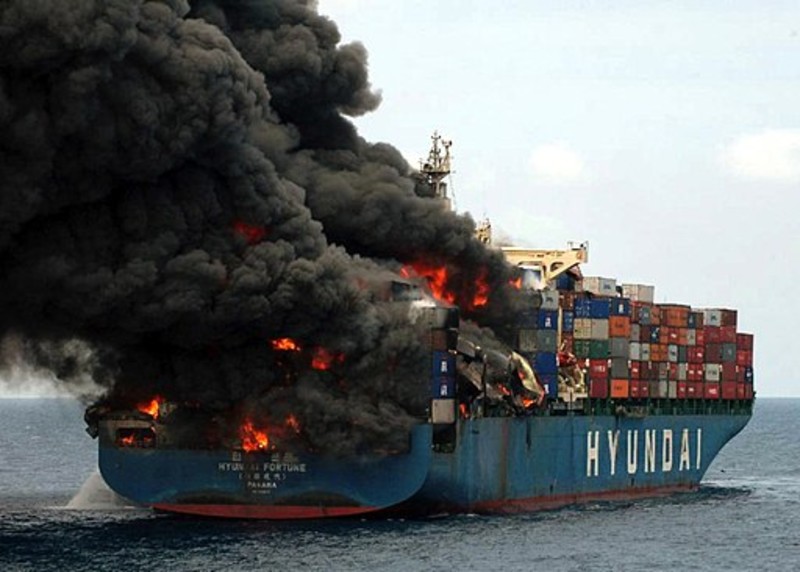