The collision took place 160 nautical miles off the coast of China near Shanghai and the mouth of the Yangtze River Delta, causing a serious fire and multiple violent explosions on board the Sanchi with flames reportedly reaching 1,000 metres high. High winds pushed the ship away from China and into Japan’s exclusive economic zone, where it sank eight days later on 14 January after burning for several days. All 30 Iranian and two Bangladeshi seafarers on board the Sanchi died in the accident. The CF Crystal escaped without critical damage and all of its 21 Chinese crew were rescued.

The cargo of natural-gas condensate, also known as ”natural gasoline” is a low-density mixture of petroleum liquids recovered during the processing of natural gas. It is lighter than water, highly volatile and flammable. As reported by the Maritime Executive, Zhi Guanglu, an official with the Chinese Ministry of Transport, referring to the efforts of the Chinese response agencies in the midst of the ranging fire and repeated explosions on board the Sanchi, unlike anything faced before, stated “As there were no similar incidents in history, we have no rescue practice or experience to follow, posing-huge difficulties for the rescue”.

Some of the challenges included; Sanchi’s position which was 20 hours of steaming from the shore for the response boats, the need to have to constantly replenish the supply of firefighting foam when fighting the fire, clouds of toxic gas forcing rescue boats to keep their distance and the extreme heat, approaching 200 degrees Celcius, enough to strip off Sanchi’s topside paint from stem to stern.

The maritime authorities of China, Panama, Iran and Hong Kong have signed an agreement to jointly investigate the collision and the black boxes of both vessels have been opened. Given that the vessels appeared to have been on reciprocal courses, the CF Crystal was southbound and the Sanchi was northbound, navigating close together and ultimately colliding, is certainly a matter to be investigated.

Likely to be the largest release of condensate in history, as reported by the Maritime Executive, it is unclear how much of the cargo of condensate burned up and evaporated during the seven days Sanchi was on fire and the subsequent impact to the environment. Condensate, has a high vapour pressure, and evaporates more easily than heavier crudes. Furthermore, it is estimated that Sanchi was carrying 1,000 tonnes of bunker fuel, a much heavier and more persistent substance than the condensate cargo.

Above all, we must remember the tragedy of 32 souls lost at sea and the sorrow of the victims’ families, like the mother who was quoted as saying “My son is still under water, who will listen to our pain?” 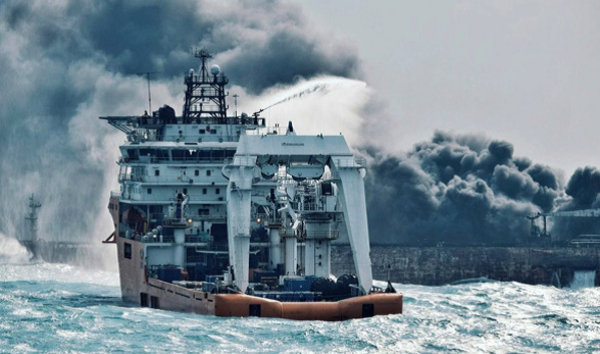