IUMI – the International Union of Marine Insurance – presented its annual statistical report on the marine insurance market at today’s conference in Tokyo. The association reported that global marine underwriting premiums for 2016 fell to USD 27.5 billion, a 9% reduction on the figure reported for 2015.

“The 2016 number follows a continuing downward trend in marine underwriting premiums. In 2015 the adjusted figures of USD 30.5 billion was in itself a 9.9% reduction from 2014. We attribute part of the reduction to the strong US dollar when compared with other currencies, but also to general weak market conditions in terms of the global economy, general commodity prices and the poor state of the shipping and offshore sectors. This worrying downward trend leads to an increasing mismatch between income levels and the marine insurer’s obligation to cover major losses, particularly in light of the trend for larger vessels and greater accumulation of risks in port”.

The 2016 total comprised income from the following regions:

and the following business lines:

Premium income in the cargo sector was reported as USD 15 billion for 2016 – a 6% reduction on the 2015 figure. Exchange rate fluctuations impact most strongly on cargo premiums and the recent strong dollar has “reduced” premium income from most other countries, this has made it challenging to identify any real market development.

The 2015 Tianjin disaster significantly eroded the performance of the 2014 and 2015 underwriting years. The final position of 2016 is still unclear due to the impact of the loss of the Amos 6 satellite and the current issues surrounding Hurricanes Harvey and Irma.

The trend towards higher value cargoes and increasing accumulation of values in ports is likely to continue and this will impact further on loss ratios. It is also impacting on premiums which are increasingly reflecting stock exposure rather than transit exposure. Added to this, increases and changes in trade patterns as well as the general economic and political environment is causing additional uncertainty in this sector.

Hull sector
The hull sector achieved a premium income of USD 7 billion which was a 10% reduction on the previous year. Although exchange rates may have been partly attributable for the decline, this has much less impact than in the cargo sector due to the global nature of the hull portfolio. Whilst the world fleet continues to grow, it also continues to age. A certain reduction in vessel values will follow with the aging of these vessels, but the two-digit drop in values from 2015, and particularly for bulk and supply/offshore vessels, must be seen in the context of the challenging market environment. Hull premiums have deteriorated in line with falling average vessel values, and there is now a mismatch between fleet growth and income levels.

Claims frequency continues its stable/downward trend and total losses are also continuing a positive trajectory albeit with a recent fluctuation of around 0.1%. However, falling vessel values increase the probability of constructive total losses, as these incur when the cost of repair exceeds a certain percentage of the vessel’s value. In addition, the inflow of high-value vessels into the global fleet increases single-risk exposure and thus the possibility of even more costly single casualties. The occurrence (or not) of major losses in single years increasingly drives the volatility of hull results, but current income levels do not cater for the occurrence of such events.

Offshore energy
Premium income in the offshore energy sector dropped by 21% to USD 3.6 billion – this is on top of the 20% drop in the previous year. As the majority of business in this sector is transacted in US dollars, poor exchange rates cannot be blamed for the drop in performance. The continuing depressed oil price – now hovering at around $50 a barrel – is the key reason for the downturn in activity and the postponement and cancellation of offshore projects.

With peak exposures remaining at broadly the same level, volatility in this sector has increased significantly. More positively, lack of activity in combination with moderate weather impact has resulted in historically low levels of attrition, reflected by moderate loss ratios in recent years. This is however expected to reverse with the reactivation and start-up of new projects coupled with a general lack of seasoned market experience.

Severe weather has had little impact on this sector from 2009, but the effects of Hurricanes Harvey and Irma have the potential to reverse those good fortunes and impact underwriting years 2016 and 2017 severely.

Outlook
The outlook for 2017 is challenging and uncertain.

“Global premium income continues to fall and this puts pressure on our sector. Although, fortunately, we are seeing only moderate major losses currently, that situation can reverse at any time. Hurricanes Harvey and Irma are examples of this and their true impact is yet to be seen. Exposure to risk will only increase as vessels grow larger and values accumulate in port. A drop in premium income makes it challenging for underwriters to continue to cover their obligations, particularly in relation to major losses.”

“Uncertainty exists throughout our market. Although the global economy appears to be improving, significant concerns or situations could lead to a stall and that will directly impact marine insurance. Global trade might be affected by Brexit as well as the current threat of a more competitive US trading policy created by punitive import taxes and lighter regulation on manufacturing. These changes to global trade flows and trade agreements will affect our sector as they evolve.

Similarly, the tough shipping market is continuing to adversely affect our premium income, despite the relentless growth in global seaborne trade. A sluggish oil price driven by the activities of OPEC and the rise in shale gas availability has dogged the offshore sector also. And, of course, natural catastrophes continue to pose a very real risk.

Continuing uncertainty is the only certainty for marine underwriters for the remainder of this year and beyond.”

IUMI’s total world-wide premium coverage has constantly improved and is now close to 95%. It includes data from all relevant marine insurance markets including Asia, Latin America and Africa. Care should be taken when making comparisons with earlier figures as coverage in those years was not as extensive. Similarly, “global” loss ratios for hull, energy and cargo do not encompass all regions and are not necessarily true reflections of the global marine market of USD 27.5bn. However, a substantial improvement was achieved this year, as IUMI could, for the first time, show accounting year loss ratios originating from major Asian and Latin American markets, in addition to the underwriting year loss ratios, reported from major European marine insurance markets and the US. When interpreting statistics, caution should always be applied regarding what the data actually relates to.

The full presentation is available on request from IUMI 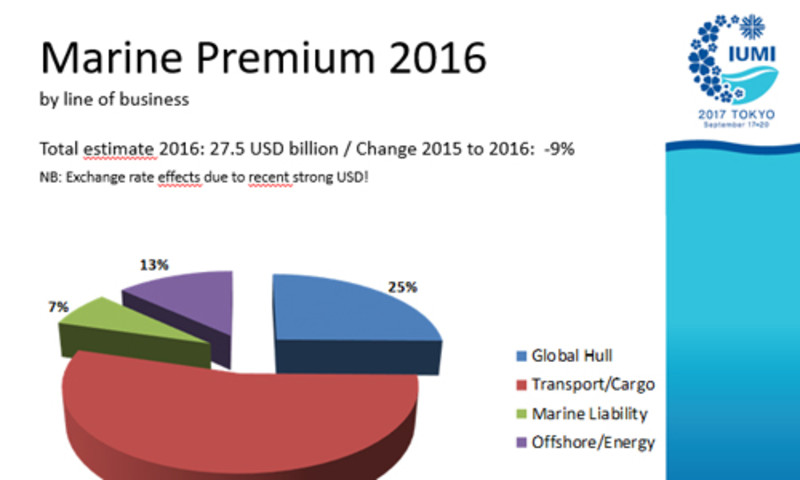